Written by one of the most celebrated and prolific scholars of the Islamic civilisation, this treatise was written in response to a questioner in regards to remembering God (dhikr) aloud and in a group. In his response, al-Suyuti responds citing twenty five Prophetic traditions that in his estimation, not only justify collective dhikr, but highly recommend it.

There is a growing need for the translation of texts that reflect the vastness of traditional Islam. This work allows English speakers the opportunity to experience the classical scholarship of the erudite imam, al-Suyuti. With additional appendices and a detailed biography of the author, this book contains much benefit and is sure to validate a practice that Muslims have taken part in for centuries. (By Yahya Rhodus)

Imam Jalal al-Din al-Misri al-Suyuti al-Shafi`i al-Ash`ari, also known as Ibn al-Asyuti 849-911AH /1445-1505),, the mujtahid imam and renewer of the tenth Islamic century, foremost hadith master, encyclopedist, historian, and biographer and probably one of the most prolific of all Islamic writers. There are an enormous number of his essays and treatises preserved today. A number of his writings concerned scientific topics or issues related to natural science and food and regimen, amongst other things.

From Asyut in Egypt,he was among the most renowned and prolific Muslim scholars of all time. He wrote more than 300 books, covering every aspect of the Islamic sciences. He memorized the Qur’an at the age of ‘eight, and then went on to study with more than 150 scholars. He travelled extensively in his quest for knowledge — to Damascus, Hijaz, Yemen, India, Morocco, and the lands south of Morocco, as well as in Egypt.

Al-Suyuti devoted his life to learning, teaching and writing. He was noble, abstinent and self-sufficient, distancing himself from people of rank and power and living on what he earned by teaching. Major writings of al-Suyuti that remain widely used today include al-Itqan, on the Qur’anic sciences; and Tafsir al-Jalalayn, which he completed when only 22. 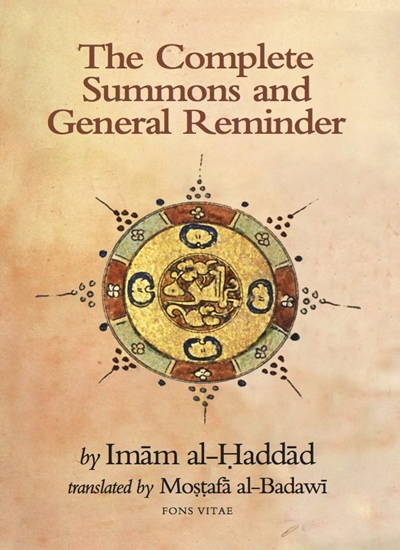 This book is unique in that Imam al-Haddad is the first scholar to have divided mankind into eight main categories according to the kind of summons to God or da’wa they need, and then detailed the rights and duties of each category, which scholars ought to enjoin upon them for the good pleasure of their Lord.

The author introduces his book by saying,

“As for the introduction, we have explained in it the summons to God, His religion, and His path. As for the eight sections, each concerns a certain category of people:

Finally, in conclusion, we give brief counsels of advice to all eight categories, in addition to general counsels and exhortations that soften the heart, the completion of which closes the book.”

Imam Abdallah Ibn-Alawi Al-Haddad (d. 1720), lived at Tarim in the Hadramaut valley between Yemen and Oman, and is widely held to have been the ‘renewer’ of the twelfth Islamic century.

A direct descendant of the Prophet, his sanctity and direct experience of God are clearly reflected in his writings, which include several books, a collection of Sufi letters, and a volume of mystical poetry.

He spent most of his life in Kenya and Saudi Arabia where he taught Islamic jurisprudence and classical Sufism according to the order (tariqa) of the Ba’Alawi sayids.

Author of the Fons Vitae Imam al-Haddad Spiritual Masters series is a disciple in the Sufi order of Imam al-Haddad. Mostafa al-Badawi is one of the world’s premier translators of Islamic spiritual texts.

He is a Consultant Psychiatrist and member of the Royal College of Psychiatrists. He studied under many shaykhs, foremost among whom is the late Habib Ahmad Mashhur al-Haddad.

His other translations include: Book of Assistance, The Lives of Man, Two Treatises, The Prophetic Invocations, and Degrees of the Soul.

He is also the author of Man and the Universe: An Islamic Perspective, recently published. He resides in Madinah.